I’ve driven past the turnoff to Hearst Castle along California’s Pacific Coast probably 50 times and never stopped in to check it out. Too touristy. Along with my friends Jon and Amy, we made the trip last month to Hearst Castle since we were camping only a few miles away. The place is amazing and lavish but a bit pretentious. The 45 minute tour cost a whopping $25  and with that you’d think you wouldn’t have to pay 3 bucks for a small Starbucks. Yes, there was a Starbucks at the evil gift shop at the entrance. Along with a million other Hearst Castle curios, knickknacks, ornaments and other assorted trash. The castle is now run by the California State Parks and it must be a huge revenue generator. Didn’t see Rosebud however and a young guide there had no idea what I was talking about.  Rosebud, a snow sled, seen in the movie Citizen Kane  (Based partly on WR Hearst) signified Kane’s childhood innocence. Maybe the presence of the sled at Hearst Castle would have given me a more childhood -like perception of the place. 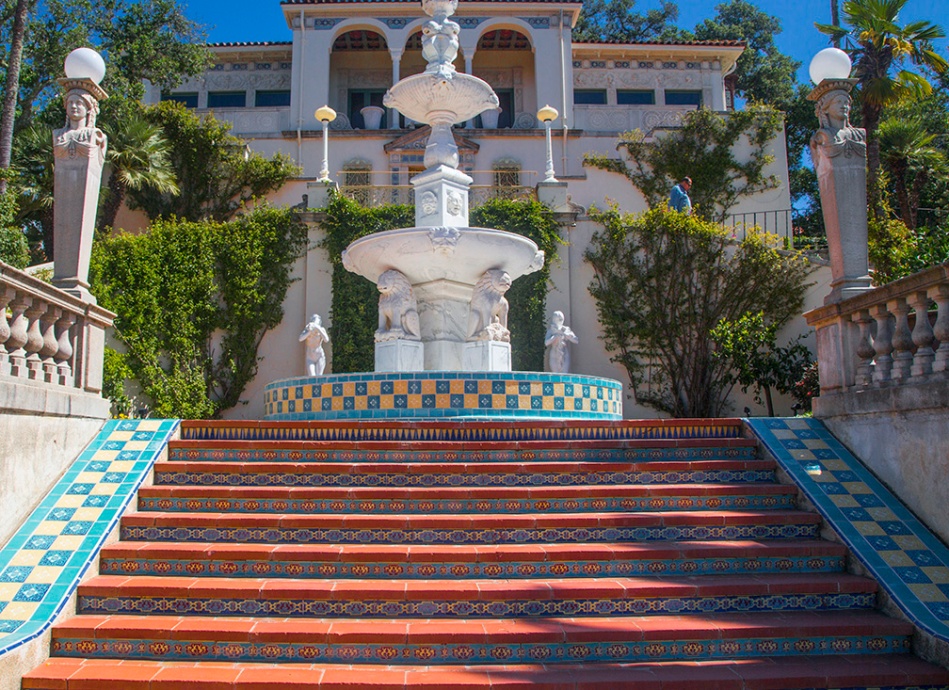 The palms were the best money could buy. 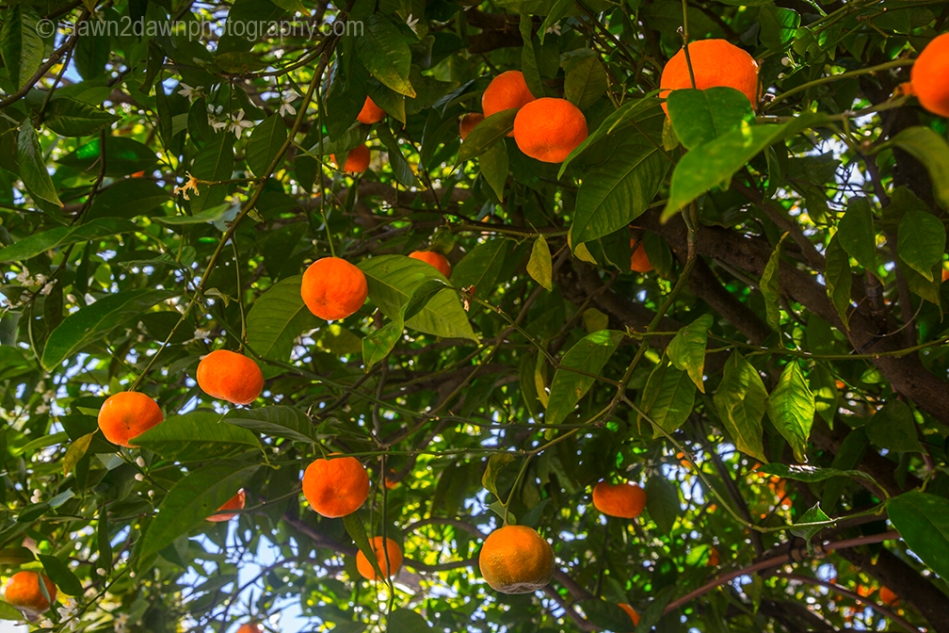 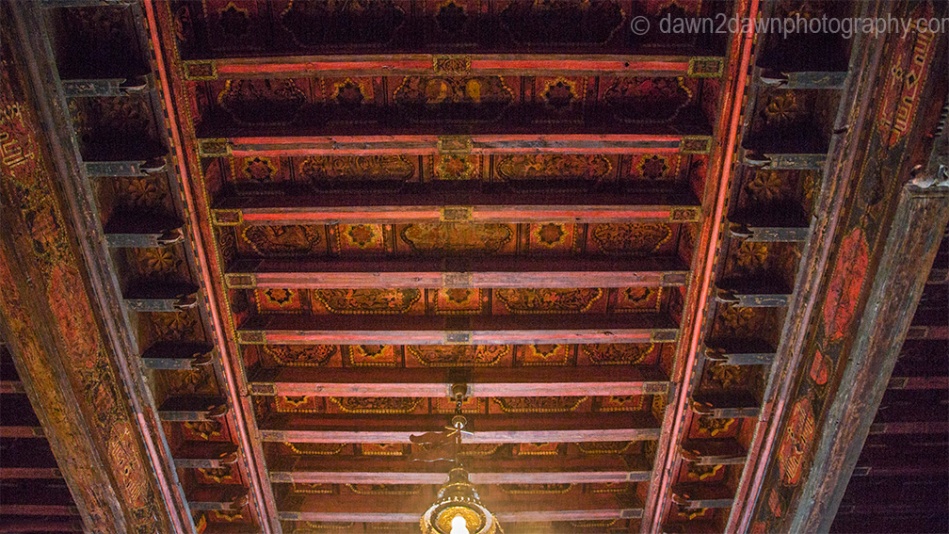 Even the ceilings were a head turner. 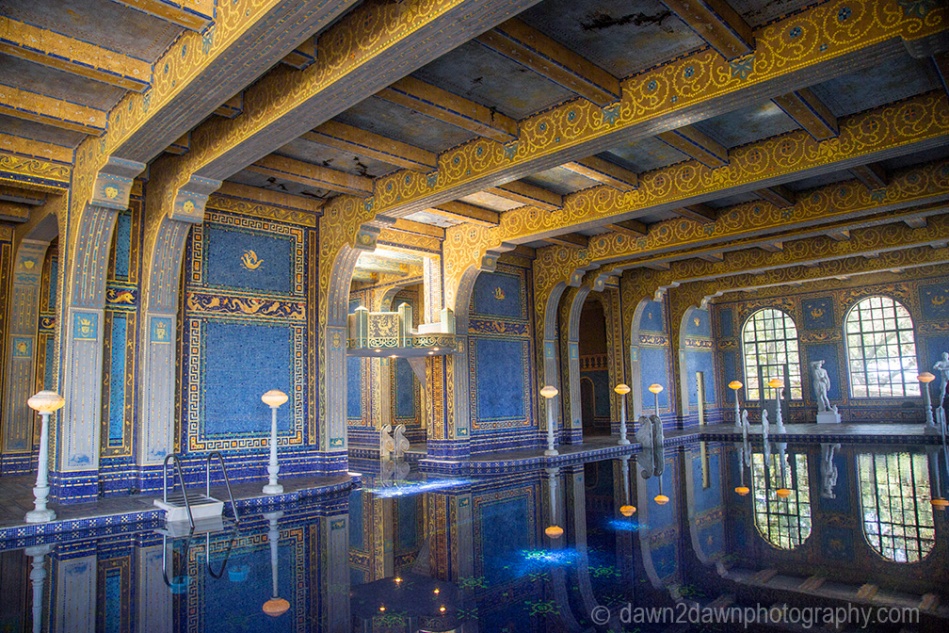 You could walk on this water. 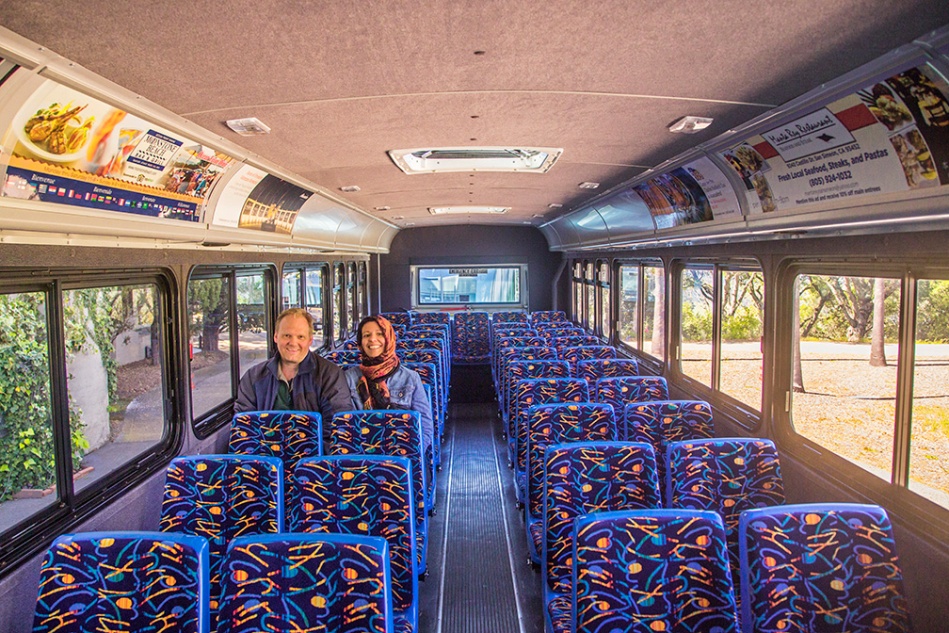 My unpretentious friends Jon and Amy on the pretentious bus up to Hearst Castle.  The castle has to sell ad space on the bus to make ends meet. 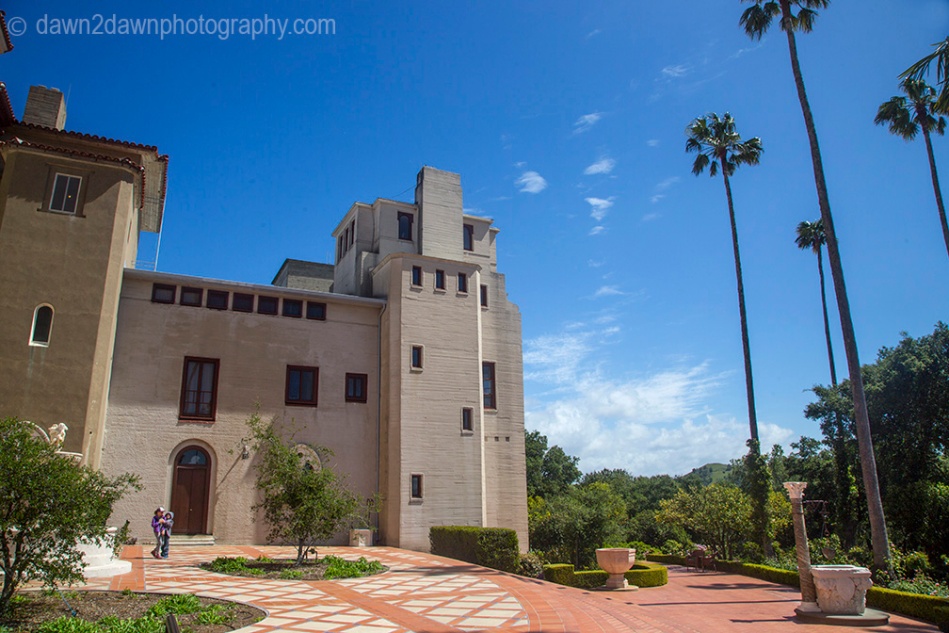 Maybe they know where Rosebud is.

One of many bizarre statues at the castle, which were the highlight of the tour. 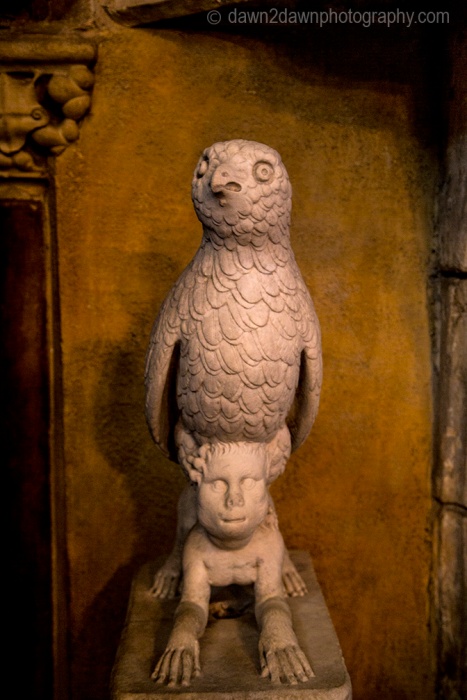 Not sure what we’re seeing here.

Couldn’t tell me where Rosebud was either. 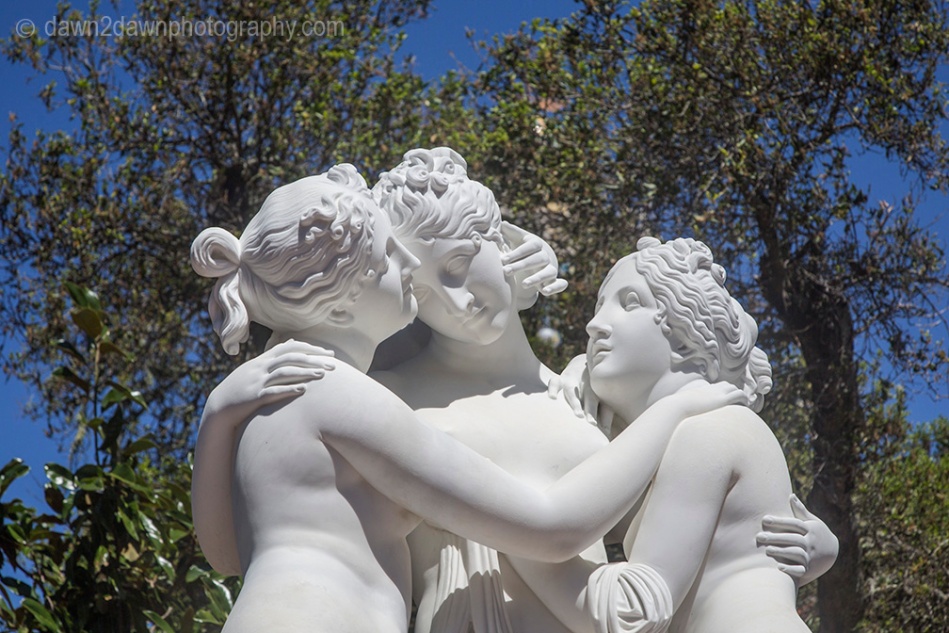 The castle architect was a woman, Julia Morgan. 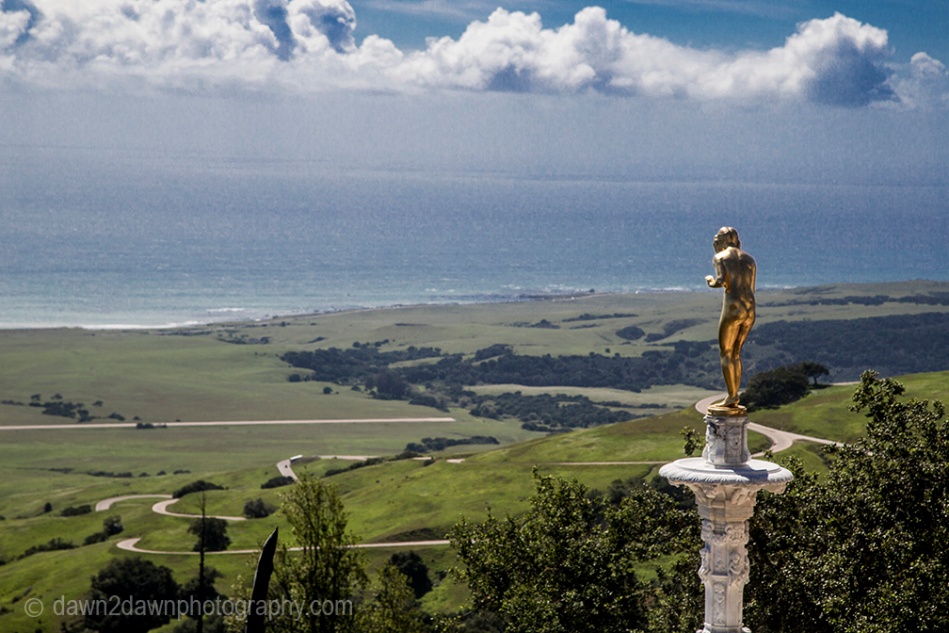 The view. This statue was poised to jump into the Pacific Ocean.

The billiards room was quite gaudy.

They could have fed our entire tour group at this table but didn’t.

Those are Barbary Sheep at the bottom, giant and spoiled cattle at upper left. They sell Hearst Ranch Steaks at the gift shop. 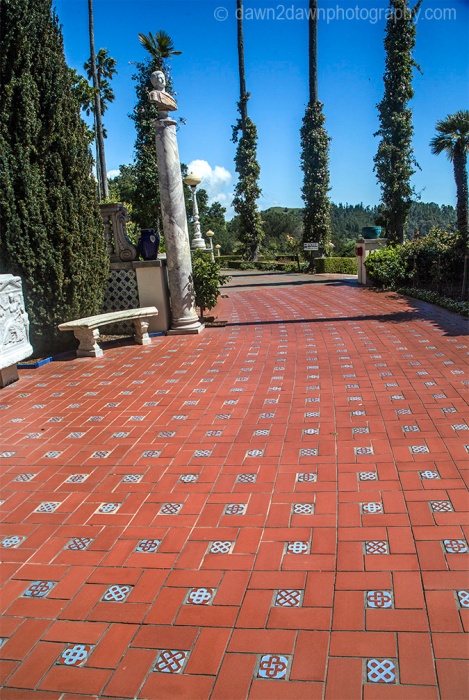 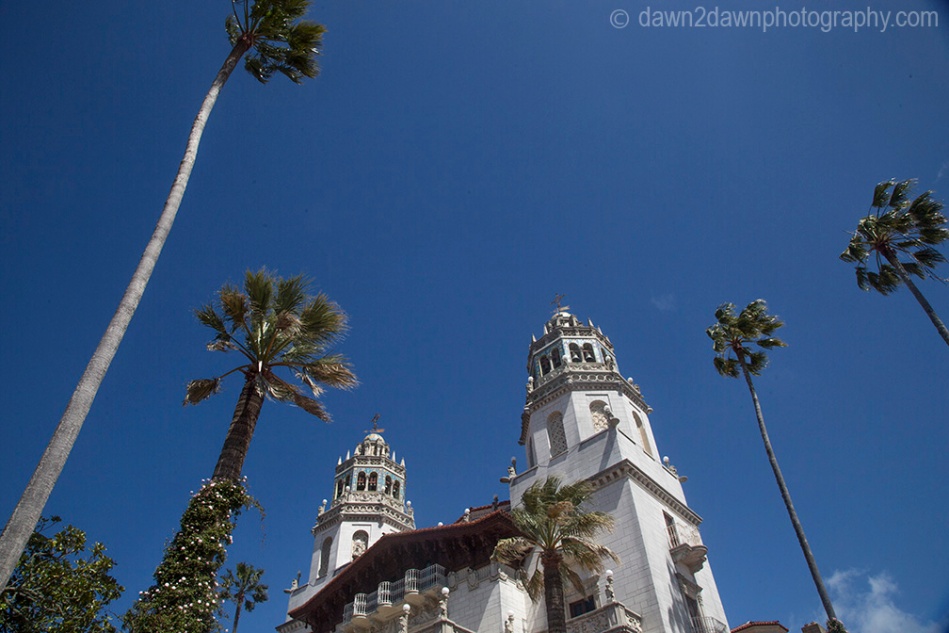