Let’s get creative. This post is about as technical I get with these posts. I don’t show algorithms or some flow charts comparing the various phases of the sun or moon. I try to keep it simple.

Using manual mode on your camera, you can get funky with your photos and suggest motion in your images or to create something altogether outside the box like the classic softening of moving water or the blurring of a static object. In the photo above of sequoia trees, you’re slowing down your shutter speed and slightly moving your camera during exposure to get this effect. This was shot hand held at a shutter speed of 1.3 seconds, an f-stop of 22 at an ISO of 50. Closing down the aperture to 22 is necessary to reduce light to the sensor since this was shot during  the day. You can then use a slower shutter speed to get the blurred effect. Just panning your camera may give you a blurred effect at a higher shutter speed.  An ISO of 50 reduces the  sensors sensitivity to light which also allows you to shoot at a longer exposure.

The shot below was shot hand held panning along with the cyclists at 1/30 second, f11. The slower shutter speed creates the blur. You should do some test shots beforehand and experiment with the shutter speed to get the look you want remembering to set the f-stop appropriately so the shot is not overexposed. It is amazing some of the cyclists were blurred and some were in focus. I guess some were moving faster than the others. You can also use a tripod for these shots and pan along. My camera doesn’t have a strap on it anymore as I almost always shoot with a tripod.

Believe it or not, this erupting geyser in Yellowstone was shot in the middle of the day. I used a 10-stop neutral density filter to block a lot of the light so I can shoot at a shutter speed of 2 seconds. Now this shot required the filter and a tripod. I probably took 50 shots here, experimenting with the shutter speed. In this situation, instead of shooting manual, shoot in aperture priority so all you have to adjust is the exposure length. I now have a variable neutral density filter which allows you to compose the shot before you set the darker density because you can’t see the scene through your view finder when you step down 8 to 10 stops.

These next two shots are classic shots of waterfalls. Since these were taken during the day, a filter was necessary along with a tripod. You can use a polarizing filter to reduce some of the light or maybe wait till just before sunset when light is already low. Both of these were shot at 1.6 seconds at F22. Again, F22 reduces the amount of light to the sensor allowing for a longer exposure to soften the water. 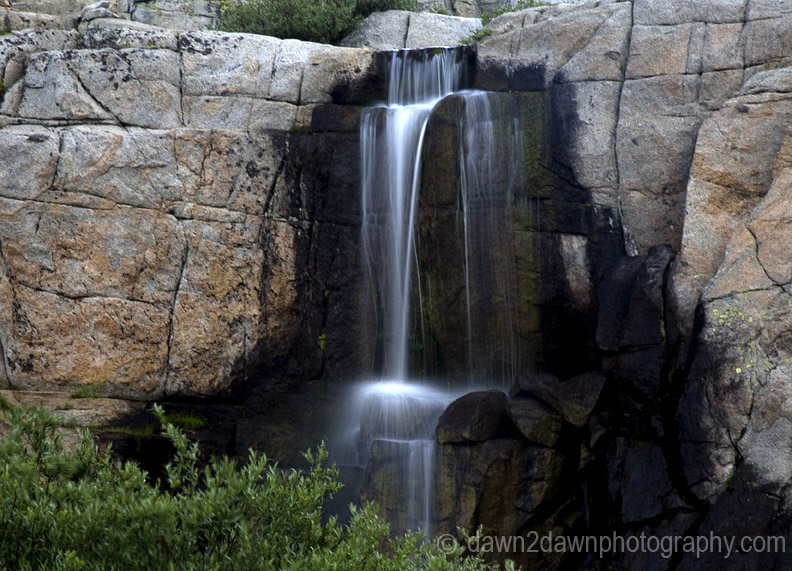 This photo of a golfer produced an optical illusion. Notice how the blurred golf club has traveled beyond the stationary golf ball. That’s because the shutter speed of 1/50 second was slower than the speed of the golf club. I wish I had that club head speed! 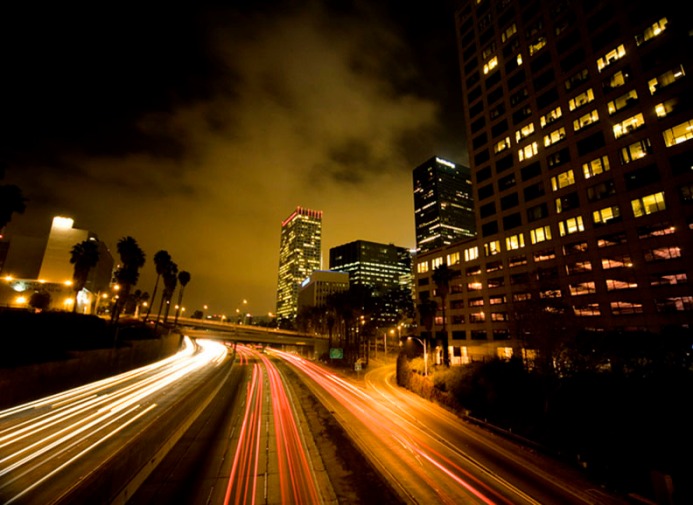 To get the effect of streaking car lights, you need a tripod and enough traffic to get a continuous line. This was shot in downtown Los Angeles just after the peak of rush hour where there was still plenty of traffic that was moving steadily. Bumper to bumper traffic (frequent in LA) would never give you this look unless you did a really long exposure. This was a 5 second exposure. 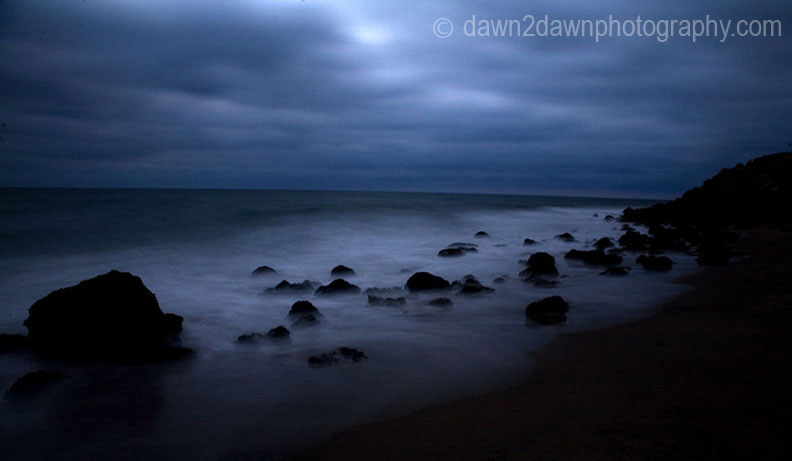 This  photo was shot with a setting sun behind some dark clouds at 20 seconds which was enough time to smooth the crashing waves over the rocks on the beach. Again, experiment with the shutter speed and check the results on your LCD screen. 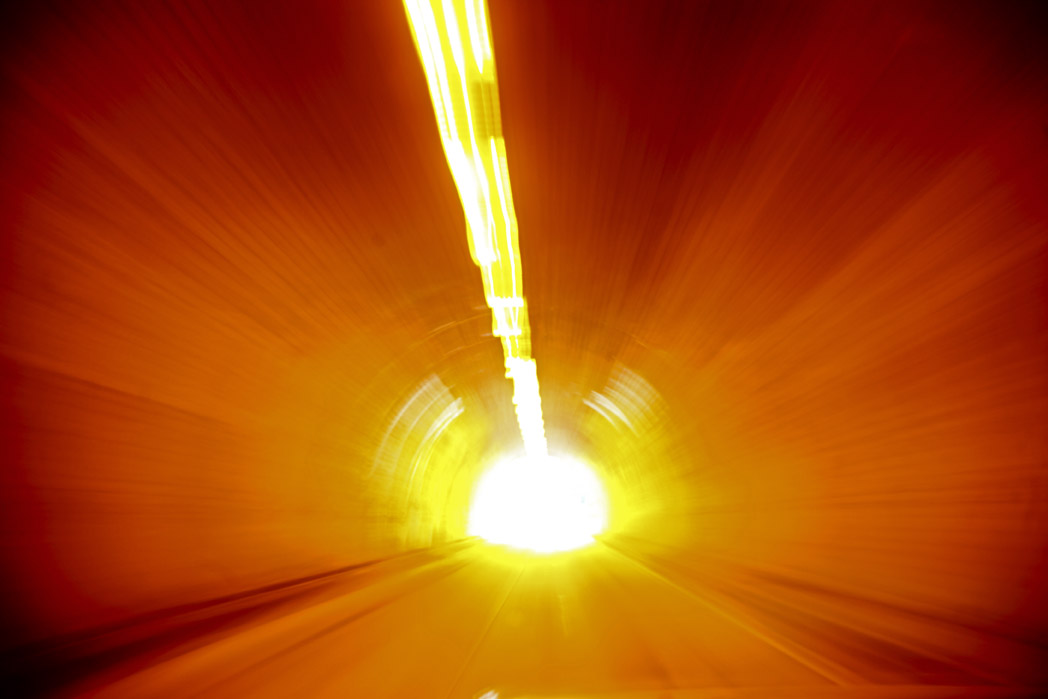 This is my Stanley Kubrick, 2001 Space Odyssey shot. This is actually the Yosemite tunnel, late at night, through the windshield of my car. This was a 1 second exposure at F4.0. The car was also moving, generating this blurred effect. Be careful when you try this as there may be oncoming traffic.

I didn’t realize it at the time, but the leaves in the Virgin River at Zion NP, were moving in a circle in this eddy. Exposure was 2.5 seconds at F22. It was daylight and a filter was used to reduce light, enabling a longer exposure. Use your tripod. 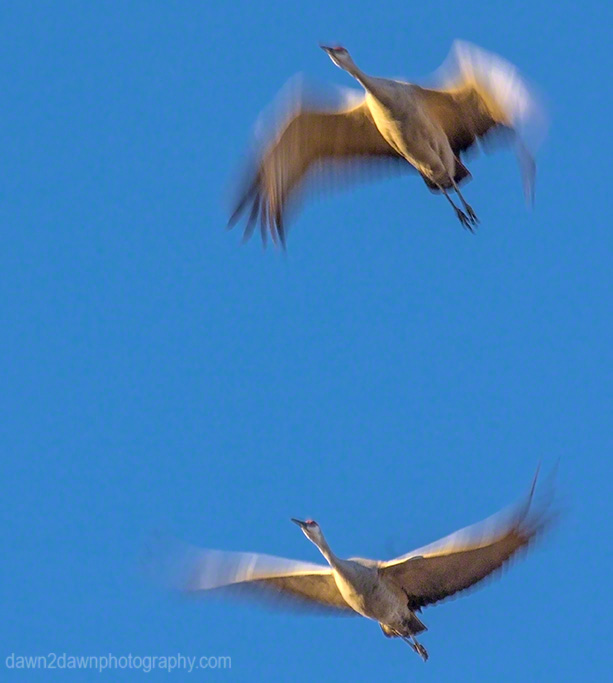 In this shot, I was trying to portray the movement in their wings. Since these sandhill cranes were also moving, I needed to pan my camera in the direction that the birds were flying to keep its body in focus, at the same time eliciting the blurred wing motion. After trying various shutter speeds, I choose 1/30 second at F22. I was pretty happy that the crane’s body stayed pretty much in focus considering the slow shutter speed but panning helped with that issue.

So, the next time you’re out shooting, consider using a slow shutter speed to produce something that your Facebook  family and friends will like over and over! Buy a good tripod and a filter that fits your most used lens. And if you don’t understand any of this, shoot me an email- MJ